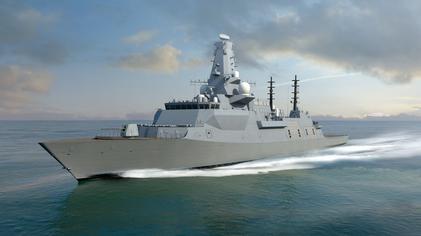 The Prime Minister has pledged to use the money to create 40,000 jobs, stimulate growth and support the UK’s nations

Scottish shipyards are set for a massive financial boost after Boris Johnson vowed to use a £16.5bn defence spending spree to strengthen the union.

In what analysts see as a blueprint for Government procurement after Brexit, the Prime Minister – who started the week with a high-profile gaffe over devolution – pledged to use the money to create 40,000 jobs, stimulate growth and support the UK’s nations.
Mr Johnson’s former advisor Dominic Cummings was a keen supporter of using defence spending to drive innovation across the wider economy, and experts said the Government will be hoping the money has an impact on other industries.

Trevor Taylor, director of industry at the Royal United Services Institute, said: “Coronavirus and Brexit are damaging wider industry but defence has been a pillar of stability.

“Investment in the military will absolutely boost innovation with knowledge transfer from defence companies as they discover new technology and manufacturing processes.”

Mr Johnson called for a “renaissance in British shipbuilding across the UK”, name-checking shipyards in England, Northern Ireland and Scotland. He said shipbuilding “illuminates the benefits of the union. If there is one policy which strengthens the UK in every possible sense it is building more ships for the Royal Navy.”

Earlier in the week, the Prime Minister sparked fury North of the border when it emerged that he had called Scottish devolution a “disaster”.

The Navy’s warships are currently built in Scotland, with Type 26 frigates constructed at BAE Systems’ Glasgow yards, after the company closed its Portsmouth yard in 2013. Work is soon to start on Type 31 frigates at Babcock’s Rosyth docks, where the new aircraft carriers were built. The Navy’s submarines are built in Cumbria by BAE Systems.

Mr Johnson said the cash injection would create 40,000 new jobs in the industry and safeguard hundreds of thousands more, as well as “delivering returns far beyond our armed forces, from aerospace to autonomous vehicles, with a vast array of civilian applications opening up new economic vistas”.

MPs and industry insiders called for the Government to follow through on this pledge by ensuring as much money as possible is spent in Britain. Ian Waddell, general secretary of the Confederation of Shipbuilding and Engineering Unions, said: “Any increase in funding is to be welcomed but it is crucial it is invested in the UK.”

Labour MP Kevan Jones, chairman of the Parliamentary shipbuilding group, said: “Industry needs firm promises so it can invest. These promises for new ships are not costed and could easily unpick if the UK continues on its trajectory of buying from the US, or the fleet solid support ship is put out to international tender.”

The steel industry also urged domestic purchases of materials for construction of new Navy ships. Gareth Stace, director of UK Steel, said: “Spending public money has the potential to deliver not just the projects, but economic growth across the UK.

“When it comes to major capital projects, like the pledge to build the largest surface fleet in Europe, it is critical that thinking starts now on how the procurement of UK manufactured equipment and materials, including steel, can deliver those aims.”