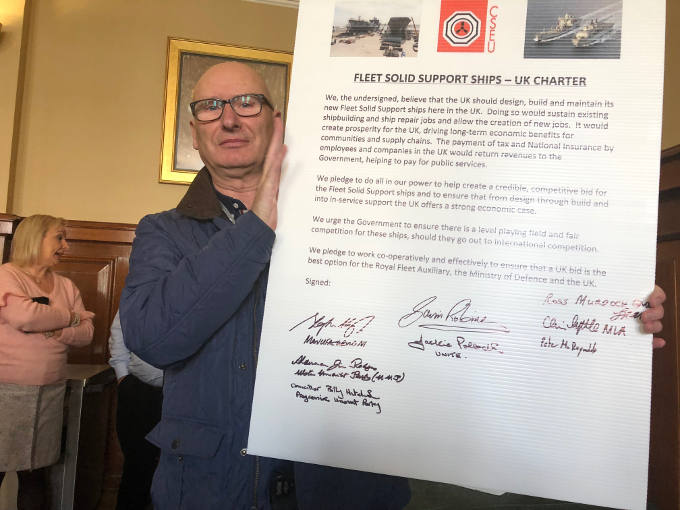 An important document about the aerospace industry has been published by a European body, following an inquiry where I gave evidence on behalf of the UK trade unions.
The report was published by the European Economic and Social Committee’s (EESC) Consultative Committee on Industrial Change (CCMI) and it looks at the challenges facing the EU aerospace industry.

Simon Hemmings, Staff Convenor at Rolls-Royce, played a key role in the compilation of the report, acting as a trade union expert to the CCMI and I would like to thank him for the work he did.

As well as recognising the importance of the highly-skilled workforce in the European aerospace industry, the report calls for a Europe wide Industrial Strategy for aerospace, to protect the industry and give it the best chance of flourishing in an ever-tougher global competition. Significantly, the report identifies the risks of Brexit, especially as the industry is a truly integrated, Europe-wide endeavour, with parts crossing the UK border multiple times before they reach final assembly lines. A bad Brexit would spell disaster for the whole European industry, not just the UK, and would hand a competitive advantage to our competitors that would be difficult to over-turn.

In Belfast, Ross Murdoch flew the CSEU flag in a signing of our Fleet Solid Support Ships – UK Charter in the city. Union reps from Harland & Wolff signed along with representatives from the city council and DUP MP Gavin Robinson. It is the latest city on our list of shipbuilding communities to sign the Charter and more will follow as we ramp up the campaign for these vital ships to be built in the UK.

Where is our National Shipbuilding Strategy now?

This was a bad month for UK shipbuilding as redundancies were announced at Cammell Laird and the closure of Appledore in North Devon was confirmed by Babcock. In both cases, there is an underlying problem that the UK industry is facing contraction after the Carrier build programme. This was foreseeable and predictable. The solution is also obvious – the Government’s National Shipbuilding Strategy should have been the vehicle for an industrial strategy for our vital shipbuilding industry and the tens of thousands of highly skilled jobs it supports in yards and supply chains across the country.

A sensible industrial strategy would include building as many Royal Navy and Royal Fleet Auxiliary vessels as possible in UK yards, driving investment and efficiency. Instead, the Government seems to be the only one in Europe that puts international competition above the interests of our own industry. If the MoD classed the Fleet Solid Support ships that will support the Carrier fleet in war-zones as “warships”, they would be excluded from EU competition regulations, could be built in the UK and would offer a lifeline to Appledore, Cammell Laird and beyond. Our report demonstrates clearly why these ships should be classified as warships – and that is exactly what several other EU nations have done with their similar vessels.

There is also an obvious question here – if we are leaving the EU, why is the Government bending over backwards to meet EU regulations?!

At the end of the month, I took a delegation of shipyard representatives to the IndustriAll Global Shipbuilding Committee meeting in Singapore. As part of the deliberations of the committee, I was pleased to sign a twinning agreement between the CSEU and the Australian Shipbuilding Federation of Unions (ASFU). This agreement cements four years of joint working with our Australian sister unions and is a public statement of our intention to carry on working closely together for the benefit of our shipbuilding industries and their workers.

The exciting process of setting up our new charity, the Alex Ferry Foundation, has passed another milestone. A Recall Delegate Conference elected five lay member Directors to the Board of the charity in London on 17th October. They are Steve Hibbert, Duncan McPhee, Bob Holmes, Tim Griffiths and Colin Stevenson. They are joined by three Directors appointed by the CSEU Executive – Diana Holland, Ross Murdoch and Alasdair McDiarmid. We are now awaiting the appointment of an Independent Director to complete the line-up and get going with our charitable work.