Why supporting the Royal Navy is a battle for British shipbuilding 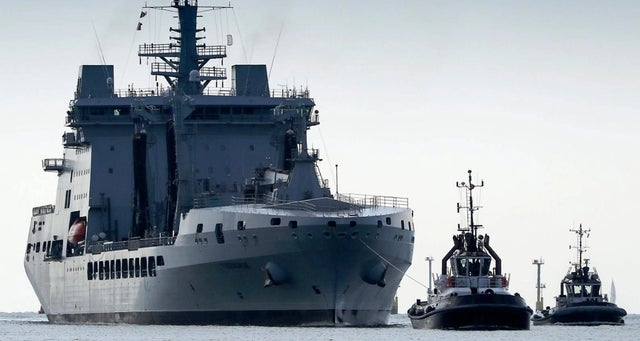 The CSEU appears in this article in the Daily Telegraph following the announcement by the Defence Secretary that ‘significant proportions’ of the FSS programme would be built in the UK.

Weighing in at 65,000 tonnes, the Royal Navy’s new Queen Elizabeth-class aircraft carriers are the service’s biggest ships, and return the UK to a small club of nations with naval air strike capabilities.

But these ships can’t operate alone. As well as screens of destroyers, frigates and submarines to protect them, the carriers need less glamorous vessels to keep them topped up with fuel and supplies.

To support them, the UK has bought four Tide-class tankers built by Daewoo in Korea. The programme to acquire three “fleet solid support” (FSS) ships to provide technical support and provisions for the carriers is yet to start in earnest, but for years has been mired in controversy over the possibility the 40,000-tonne vessels could also be built abroad.

According to some, the fate of Britain’s shipbuilding industry depends on this £1.5bn order.

While work that will run into the next decade on new frigates is either under way or about to start at the yards of BAE Systems in Glasgow and Babcock in Rosyth, there’s little else in the pipeline.

British yards cannot compete with foreign rivals when it comes to mass-produced civilian ships as they do not have the same economies of scale and low costs, and demand is thin for the highly complex and costly specialised ships where the playing field is level.

For UK shipbuilding yards, such Appledore in Devon, Cammell Laird in Birkenhead and Harland & Wolff in Belfast, the FSS being British-built could be a matter of life and death.

Although owned by the MoD, support ships such as FSS vessels are operated by the Royal Fleet Auxiliary and crewed by civilians.

This means they are merchant vessels and not classed as warships – which have to be UK-built because of national security concerns – and the work could go abroad.
Ministers had previously argued this distinction meant under EU rules the work had to be tendered internationally. This insistence came despite the fact the ships will sail alongside the Navy and other countries’ navies have no such qualms about ensuring their own support ships are domestically built.

However, a government U-turn in September resulted in defence secretary Ben Wallace referring the FSS as warships following intense criticism of the policy.
On Tuesday, he gave further hope by announcing that the competition to build the FSS – which stalled last year over pricing – would relaunch in the spring.
“Shipbuilding has historically been a British success story, and I am determined to revitalise this amazing industry,” Wallace said.

The programme would be “the genesis of a great UK shipbuilding industry, and allow us to develop the skills and expertise for the shipyards of tomorrow”, he added.
However, the news got a lukewarm reception from unions and experts. Pushing aside the jingoism, critics homed in the MoD noting the competition would “require a significant proportion of the build and assembly” to be carried out in Britain.

Defence officials refused to be drawn on just how significant the requirement is, leading to fears that rather than ensuring Britain’s shipbuilding industry is buoyant, the FSS contract might not even keep it afloat.

Ian Wadell, general-secretary of the Shipbuilding and Engineering Unions that has fought bitterly to have FSS vessels built in Britain, said: “This lack of certainty is hugely frustrating given that we still have no idea what this means for UK shipyards.

“‘Substantial’ is a weasel word and what the MoD might think of as significant might look entirely different to skilled workers and regional communities facing job losses without a guarantee to build these ships in the UK.”

The Telegraph understands that only two groups are actively considering bidding for the FSS. The first is an all-British consortium dubbed “Team UK” comprising BAE Systems, Babcock, Cammell Laird and Rolls-Royce.

Previous prospective bidders from Japan, Korea and Italy dropped out of the earlier competitions but could return if they can line up UK participation.
The shipbuilding union fears that much of the work could go to Spain if Team Resolute wins out. Harland & Wolff has only 100 staff and last built a ship in 2003, while Appledore has just one employee looking after the mothballed shipyard. To be fair, their parent company Infrastrata has spelled out its ambitions to expand under its ownership.

Like many state-backed yards, Navantia’s ownership means that to guarantee work, it can offer terms impossible for commercial rivals to match. It’s not alone in this: some other shipbuilders that have previously expressed interest in the FSS have similar government backing.

Wadell urged the Government to “commit now to what share of the work is expected to go where”.

He added that ministers “need to understand that FSS is not a nice to have but it is vital as a bridge that will maintain our workforce until future naval procurements come down the pipeline. The alternative is job losses and yard closures.”

Paul Stott, senior shipbuilding lecturer at Newcastle University, described the Government as having “tied one of the UK industry’s arms behind its back” by inviting foreign bidders, even though classing the FSS as warships “takes them outside the ambit of public procurement rules and enables the contracts to be directed to the benefit of the development of the industry and the economy in the UK”.

Foreign shipyards’ involvement could benefit the UK from technology transfer, he admits, but warns “it is possible that it will simply add cost and confusion to the procurement process and dilute the benefit of these contracts”.

Despite hopes FSS will put British shipbuilding on the crest of a wave, it looks like the battle for these ships – or warships – has only just begun.